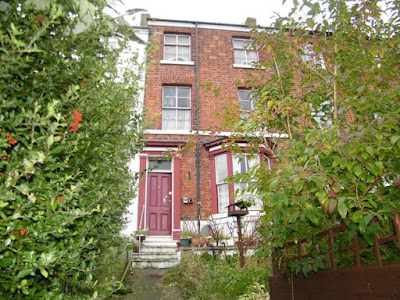 It occurred to me the other day that I've only ever lived in terraces. Houses, flats, frequently (as now) an end-terraced house, but always one in a similar row. That may be why in 'Wreck' I'm drawn to detached homes with land to breathe.
It may also be why I'm constantly rebuilding, re-modelling my homes - extending, pushing outwards, making difference.
But it also occurred to me that I should celebrate the terrace do-up this week. Not only because that's my experience, but because so many of you write and tell me about how it was that tiny terrace renovation that got you started on the whole 'wreck of the week' thing. Here's Tony, for example:


I could fill a few blogs with my ventures - various updating jobs (the odd wall down here or there, the odd wall build there and here, etc., extensions, barn conversion, three-storey Georgian detached conversion, Burnley stone-terraced and another end-of-terrace that were in various stages of neglect.

Or Cheryl and hubby who doubled the size - and the value - of their 17th Century Cumbrian terraced longhouse in a herculean task:


It has been a long journey - the state of the house impacted on the houses o both sides. It is sandstone, built on red sand, no footings as such, two-foot-thick walls - some with huge tufts of horse hair/lime, a bit like wattles and daub. I thought someone had buried a cat in the wall as the "fur" looked dubious! ....On several occasions, we were about to throw the towel in but the resilience kicked in and we persevered. We consider this to be a huge achievement and we are delighted with the space.

So, on that positive note, here's a bundle of potential terraces for renovation.
Starting on the large side, and in one of my favourite seaside towns, is this five-bedroom terrace in Whitby, pictured top and below.
It is massive: two big reception rooms, a long hallway and a narrow kitchen downstairs; two big bedrooms and the bathroom on the first floor; three more bedrooms on the second floor, and two rooms in the attic! 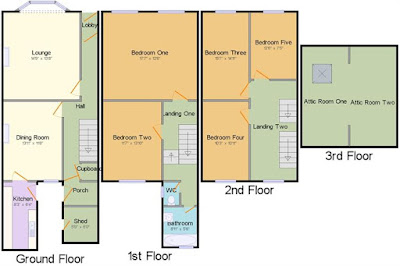 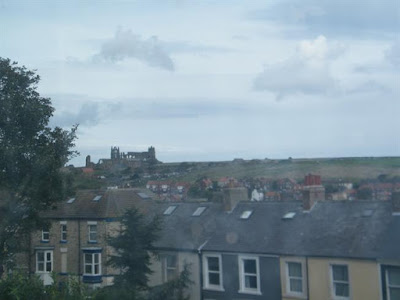 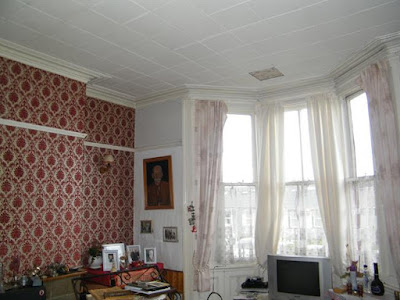 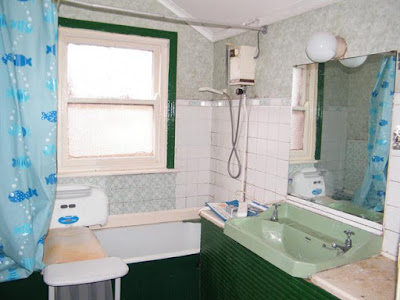 Front garden plus rear yard, and you probably have to stand on a  box to see the sea but at under £200k well worth investigating.
On the market through Bridgfords with a guide price of £190k. More here and here.
If that's a bit on the large side, how about this cute cottage - also in North Yorkshire - in Undercliffe, Pickering? 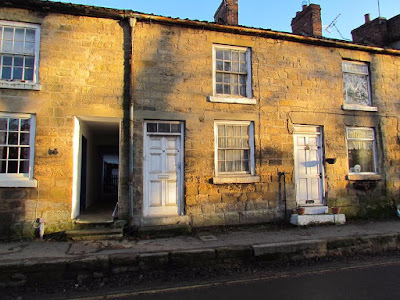 Two rooms downstairs, one bedroom and bathroom upstairs - about enough space to swing a cat or two. But the rooms are a decent size and the real attraction is in its big garden and outhouse, and the possibility they might offer to extend. 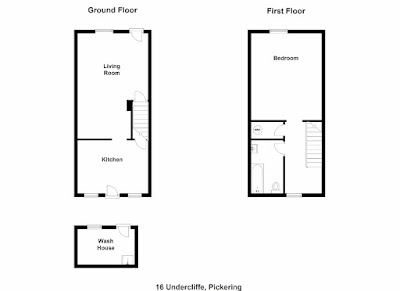 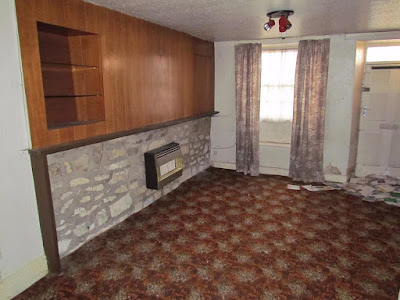 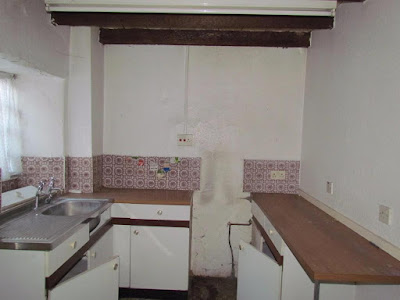 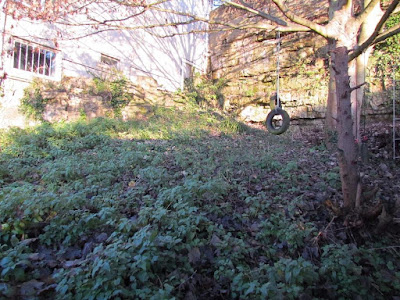 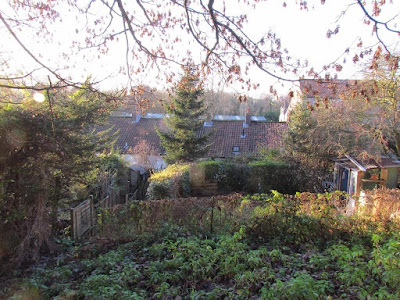 The Grade II-listed property is on the market through Boulton & Cooper at offers over £90k. More here and here.
Also with a big garden (and rather better maintained) is the Welsh cottage below, in Fishguard, Pembrokeshire. 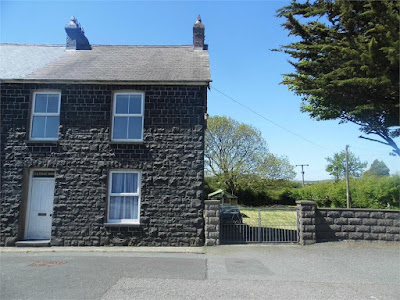 Strictly speaking, Cleddau House is a semi rather than a terrace but surrounded by neighbours so I think it still counts.
Two reception rooms and large kitchen, plus walk-in pantry downstairs; three bedrooms and bathroom upstairs. There's an old conservatory, garage, hardstanding for cars front and to the side (necessary, the house sits on the A40) and that gorgeous garden. 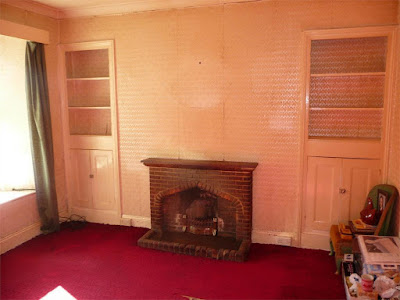 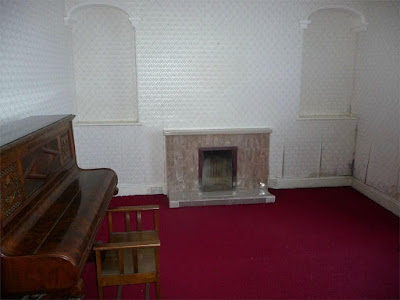 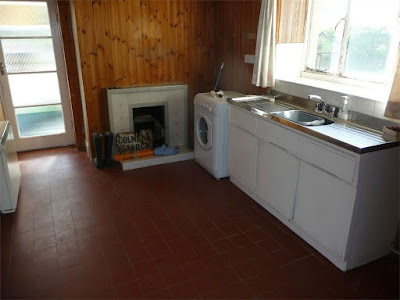 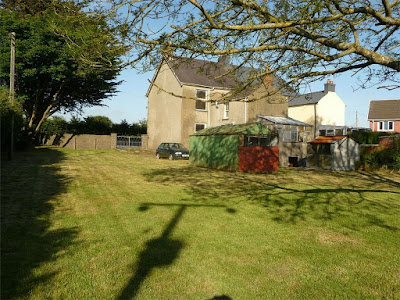 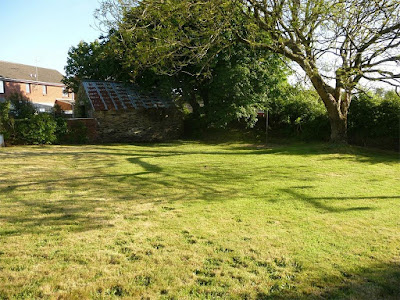 On the market through JJ Morris with a guide price of £165k. More here and here.
And finally, I admit it's the wallpaper on the ceiling that drew me to this one: 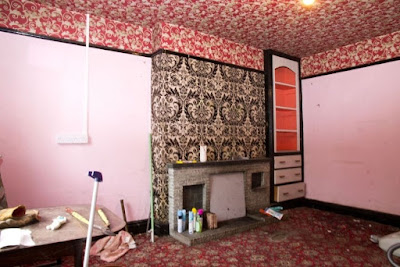 Who would wallpaper a ceiling? In red flock?!
Not the prettiest cottage I've seen, and there's some weirdness about access and "drying rights" at the back, but a nice location in the Cumbrian village of Allithwaite, just a  couple of miles from the coast. 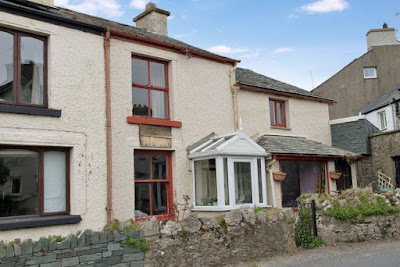 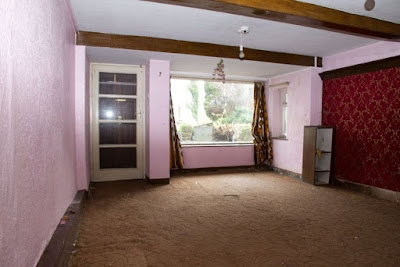 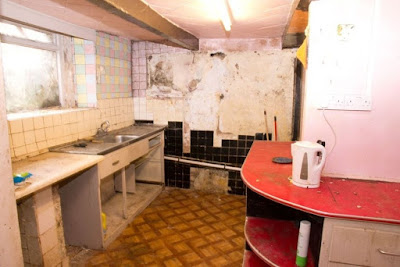 Three bedrooms and bathroom upstairs, two reception rooms (the 'dining room' was once a shop, hence two front doors), plus kitchen downstairs, and adjoining store/shed.
On the market through Hackney and Leigh at £140k. More here.